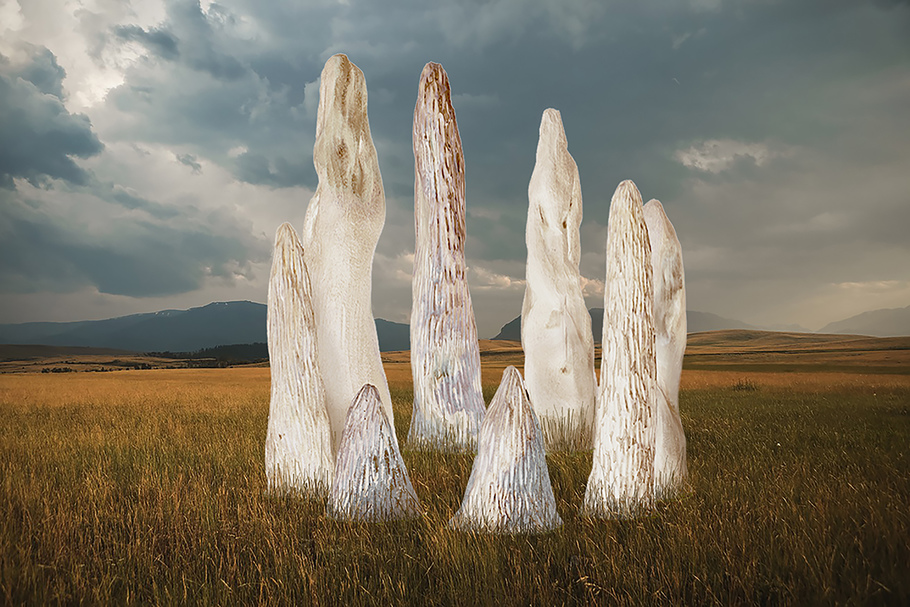 'Dead Gods' is a living monument that honors an ancient fungi that are the origin of life on earth as sacred ancestral deities.

‘Dead Gods’ is an ongoing project in which I resurrect the prehistoric super-fungi the prototaxites by growing them from their living contemporary descendants. These repeated resurrections increase in size, number and sometimes species diversity for each iteration. This rendering demonstrates a version of this work in which I resurrect the Dead Gods to the scale of some of the largest prototaxites found in the fossil record.

In a moment when we are collectively grappling with the likelihood that one million species will become extinct within decades, I am thinking about an ancient terrestrial fungi that gave rise to the vast diversity of plant and animal species that exist today. The impact of mycelium as the greatest shaper of the living world can be seen all over; from the presence of giant forests (mycorrhizal partnerships), to the evolution of human brain (psilocybin), and the reason humans have been able to combat bacteria enabling us to thrive and dominate (yeast and penicillin). During past extinction epochs, mycelium acted as a life-raft for any species that shared a mycorrhizal relationship as mycelium are one of the few life forms that do not require sunlight. Perhaps even more profound is the way early plants and their fungal partners changed our atmosphere over deep time, lowering carbon dioxide and increasing oxygen composition.

‘Dead Gods’ will pay tribute to a specific prehistoric mushroom called the Prototaxite. Prototaxites lived 416 million years ago and were, at that time, the largest living organisms on the planet. These totem-like giants – known to have grown 20-30 feet tall – dominated the early Devonian landscape. ‘Dead Gods’ ennobles the Prototaxites, celebrating them as deities of life on this planet.

‘Dead Gods’ will be grown from a modern-day mycelium descendants of the ancient fungi giants. Reminiscent of a science-fiction narrative, in re-animating these now extinct life-forms I examine the utopic desire to reverse the inevitable process of extinction. To meet the challenges of the Holocene Extinction, we need to extend our imagination of ancestry beyond the human narrative and recognize our place as co-collaborators in the story of life on earth.
Loading...